Whether as a Dessert or to have for Afternoon Tea…

Last night at 9 o'clock, I randomly decided to do some baking (as you do). I am a massive coffee enthusiast (those of you who know me, know how true this fact is), I love everything about it; the smell, the taste… I also like Tiramisu, however I am not the biggest fan of boozy desserts, I prefer the coffee flavour to be the dominant one.
In the past, I have made tiramisu cheesecake and it was divine. I thought about making another, but I really fancied something cakey, so I thought about making a mini cake version of a non boozy tiramisu. After all, I had my stove top espresso maker and all the ingredients I would need. 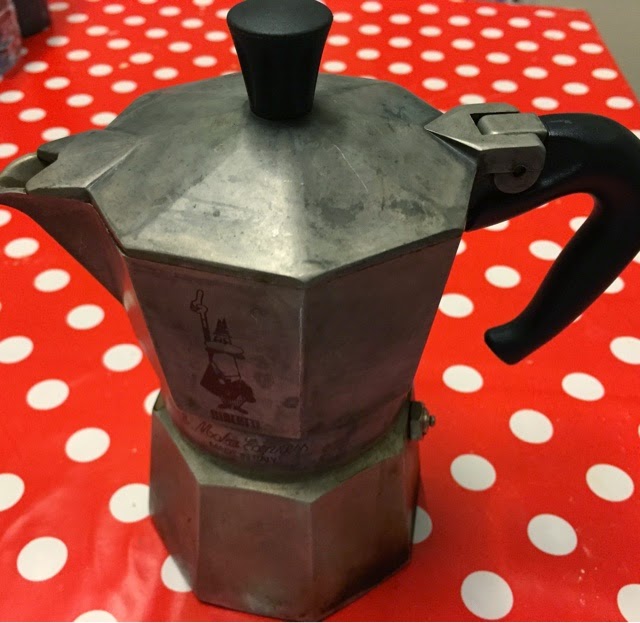 Firstly I made a basic sponge mix*: (self raising flour, eggs, caster sugar, butter and baking powder). To this I added 3 heaped tablespoons of cocoa powder and a shot of espresso (I had just made on the stove). I greased two baking trays (fairly shallow ones) and poured in a thin layer of the mixture into each. I baked these for a few minutes until they were springy to touch. 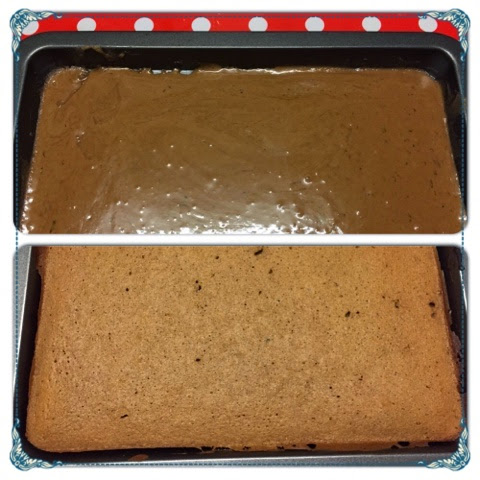 Using a cookie cutter I cut shapes out of the two thin cakes and placed the on two separate plates, one plate of the cake pieces I doused in another shot of espresso and left to soak, the other I left as they were so as to cool. 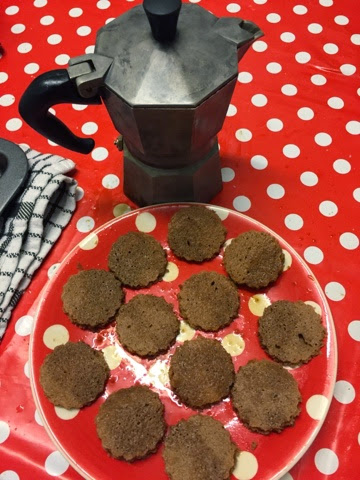 Meanwhile I poured 120g of double cream into my mixer and whisked on a high setting until peaks began to form, I then added 250g of mascarpone cheese and two heaped table spoons of icing sugar and continued to whisk for another minute or so. I then spooned the filling into two bowls. One bowl I left as it was, and to the other I added two heaped teaspoons of cocoa powder and mixed it in well. 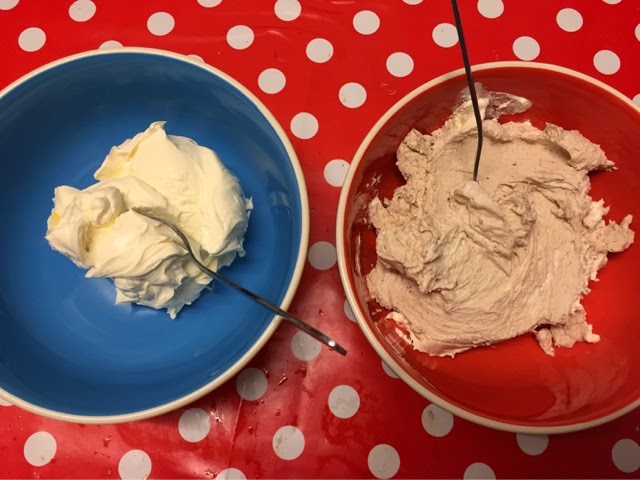 After about 20 minutes of the cake pieces being soaked in the espresso, I was able to start constructing my Tiramisu Cake Bites. I started the layering process of a cake piece, followed by some of the original mascarpone/cream filling, then I placed a piece of espresso soaked cake in the middle and followed that with some of the chocolate mascarpone/cream filling, finally I placed a final cake piece on the top of my little tower. 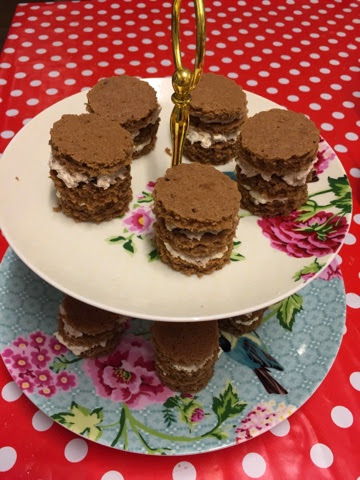 These measurements made 12 little towers of coffee/chocolate goodness. Perfect for having people for afternoon tea, but also delicious as a dessert served with ice-cream (as pictured below with my particular favourite Häagen-Dazs flavour Pralines and Cream). It seems rather labour intensive, but in actual fact, it only took 40 minutes and I made them on a school night (baking: my way of relaxing after a long day of teaching!) 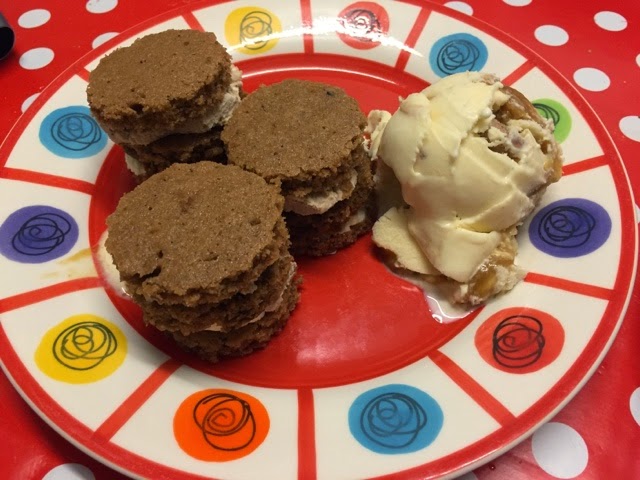 *You can use any sponge cake recipe.

Posted by ateacherstaste at 13:45 No comments:

Banana, Oat and Honey Muffins with Berries and Seeds

So, it's that time of the year again. The buzz and excitement of Christmas has gone, the New Year has passed and with it has brought a desire to be healthier, less indulgent more sensible etc etc. For us teachers, it also a time to get back to the grind. Instead of what we have been used to the past weeks (waking at midday and sleeping very, very late), we have to… Wait for it… Set the dreaded alarm for 6am! A tall order. I have gotten used to eating when I want, what I want, and cooking and baking lots of treats. I started thinking today about making some snacks to take to work and immediately found myself daydreaming and salivating about muffins, specifically banana muffins (for me anything with banana is better). I then thought about the fact that, having eaten so much over the holidays, I should really try to balance my diet (albeit for a little while). That is when I decided to rev up my usual banana muffins and pack them with fibre and antioxidants (To make them resolution friendly). The perfect guilt free treat to tempt co-workers with on the first day back. 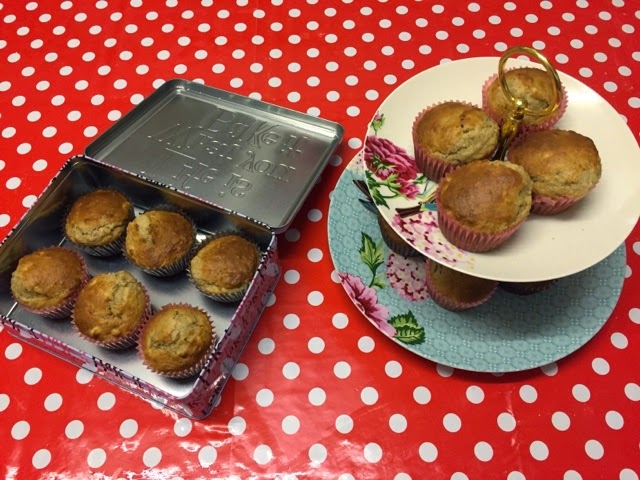 First I melted 75g of unsalted butter until it resembled oozy, yellow goodness. I then measured out 250g of self-raising flour, added a nice big heaped teaspoon of cinnamon (in my eyes, you can never use too much cinnamon), half a teaspoon of ground nutmeg and 100g of caster sugar (I infuse my caster sugar for weeks with empty vanilla pods to give it to most gorgeous aroma and taste of vanilla), half a teaspoon of bicarbonate of soda and a pinch of salt. 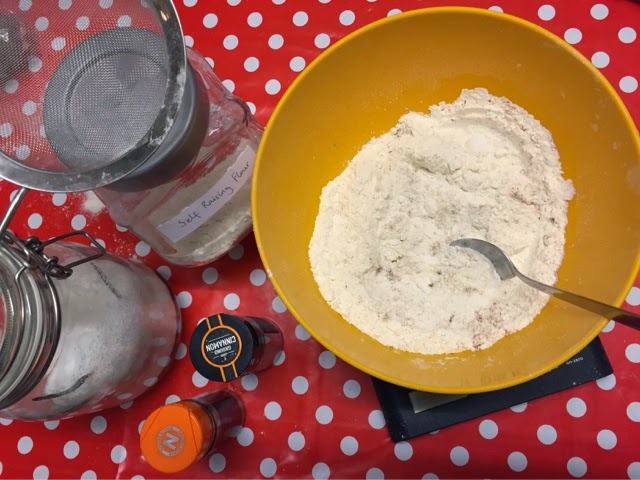 Then comes the fun and stress relieving part: mashing the bananas. I took two bananas, they should preferably be ripe, however I had only just bought mine and they were not yet as ripe as I would have liked. It took a lot more muscle to mash these younger bananas, but it was so worth it (yes, I love the smell of a mushed up banana.) 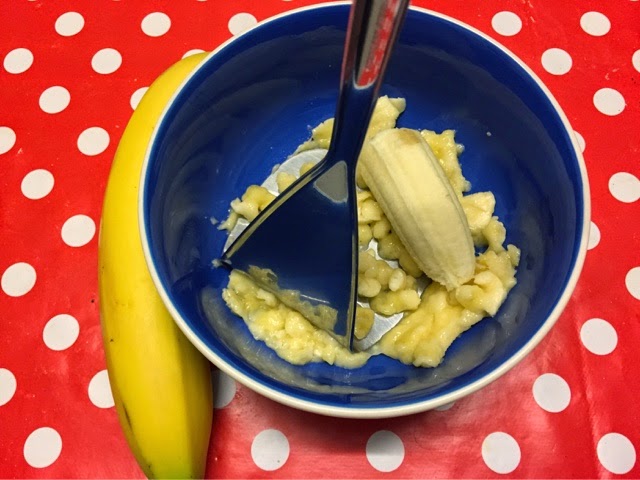 I cracked 2 eggs into my mixer (one of my exciting Christmas presents) and then slowly added my melted butter, 125ml of milk, a good long squeeze of wildflower honey (it tastes more intense than regular runny honey). After the mixture has all blended together I added the mashed banana and stirred the mixture into the bowl with the dry ingredients. 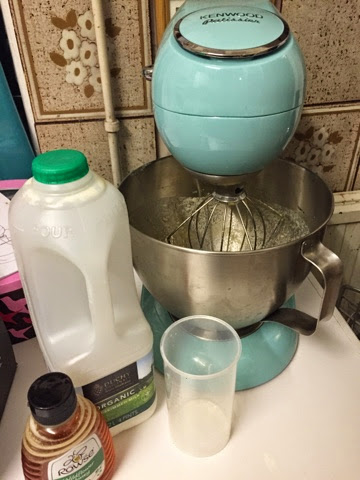 Now for the healthy part. I thought to add some fibre I would add some oats (75g), not too many, but enough to change the texture of the muffins slightly and make them 'feel' a little healthier (like how Starbucks adds oats to the top of it's 'Skinny' blueberry muffin to make it seem, well, skinny.) 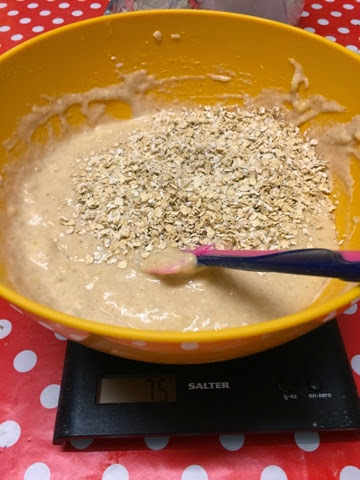 I had frequented my favourite supermarket (Waitrose) earlier in the day and indulged (yes I did say indulged) by buying a bag of mixed seeds and berries. Initially this was just to snack on during the week, to try to divert my attention from the chocolate always stashed in my desk drawer at school. But then I thought why not throw some into my muffins. 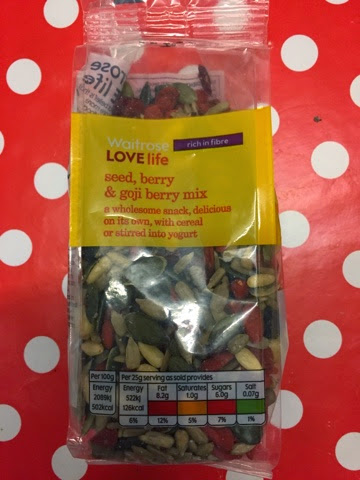 The finished result: 18 delicious and fairly healthy muffins to help ease me into a new school term. Three muffins had already disappeared before I even plated them up! Delicious!
Posted by ateacherstaste at 16:54 No comments:

My take on a Thai classic

I really fancied making a Thai green curry at home. In the supermarket I picked up the Thai green curry paste, the coconut milk and then went to choose some chicken. I was originally going to use diced chicken and make a traditional curry, however in the meats aisle I got chatting to a man who told me the joys of cooking a curry with chicken thighs as they are much more flavoursome. It got me thinking, I could do what he was suggesting and debone and skin the thighs, or I could leave them as they are and create a casserole with the skin becoming crispy and the thai green curry sauce enveloping these sumptuous meaty pieces. I was sold. I decided to throw some vegetables into the mix too. I chose mixed peppers, cabbage and red onion, as well as some bean sprouts for a difference of texture and colour.

When I started cooking, I decided to start cooking the chicken thighs first in a casserole dish, seasoned with salt and pepper, (about 25 minutes) until they had browned slightly and there were some delicious juices oozing out from under them. 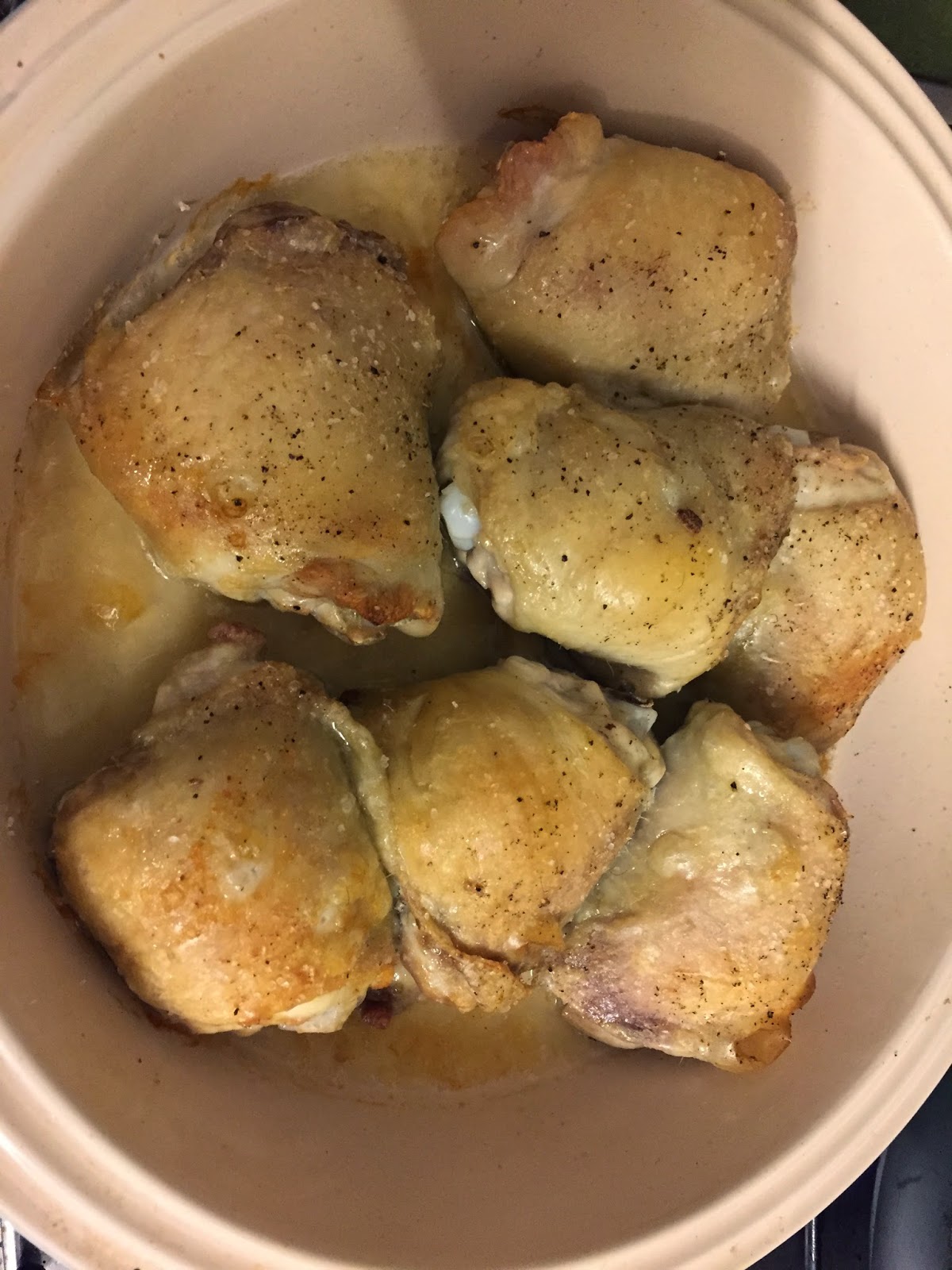 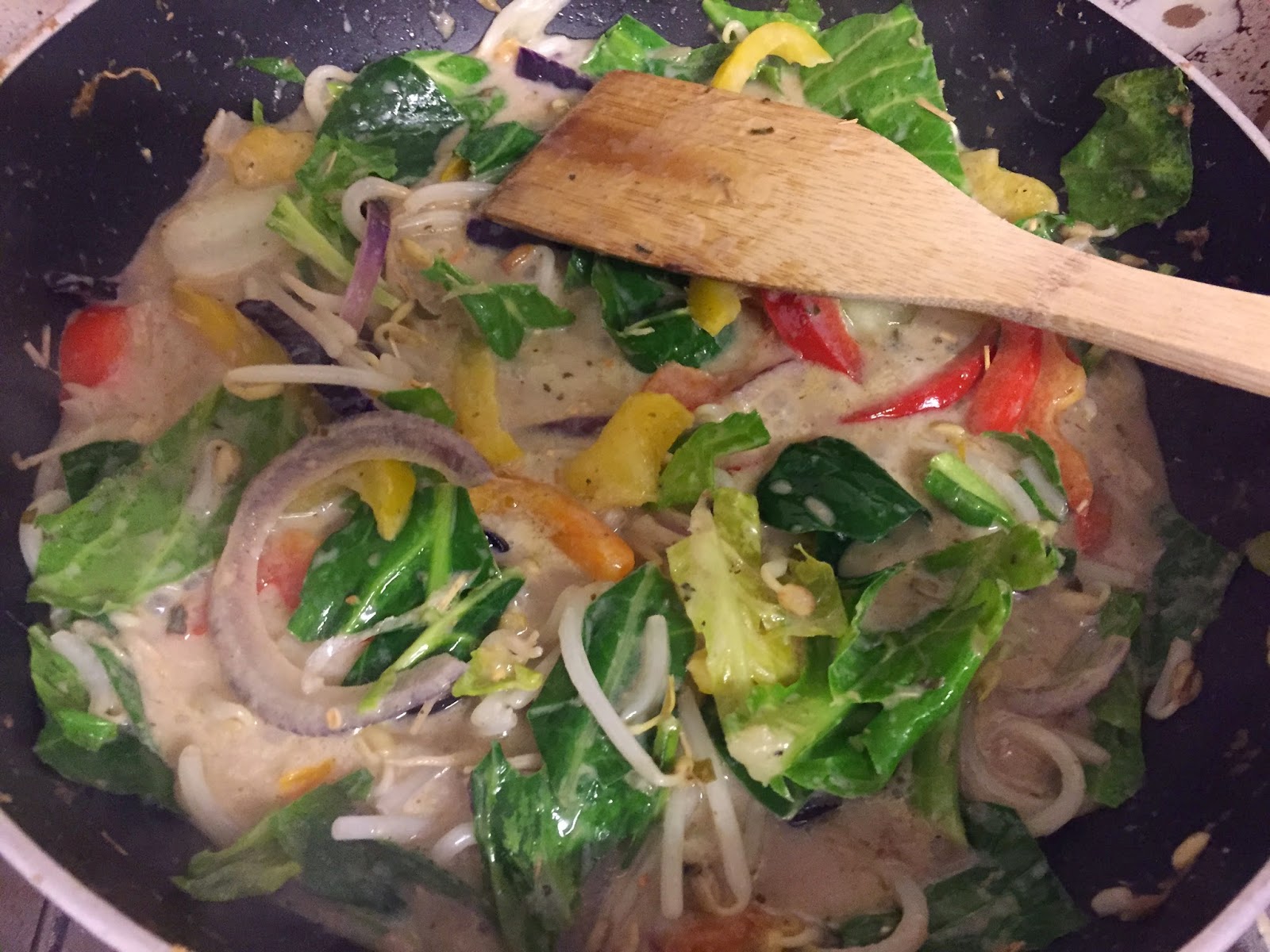 Now for the exciting part. I took the chicken out of the oven and added the beautifully colourful and sweet smelling vegetables and sauce into the casserole dish and stirred it all up, ensuring I was mixing the chicken juices in and fully coating the chicken with the sauce. 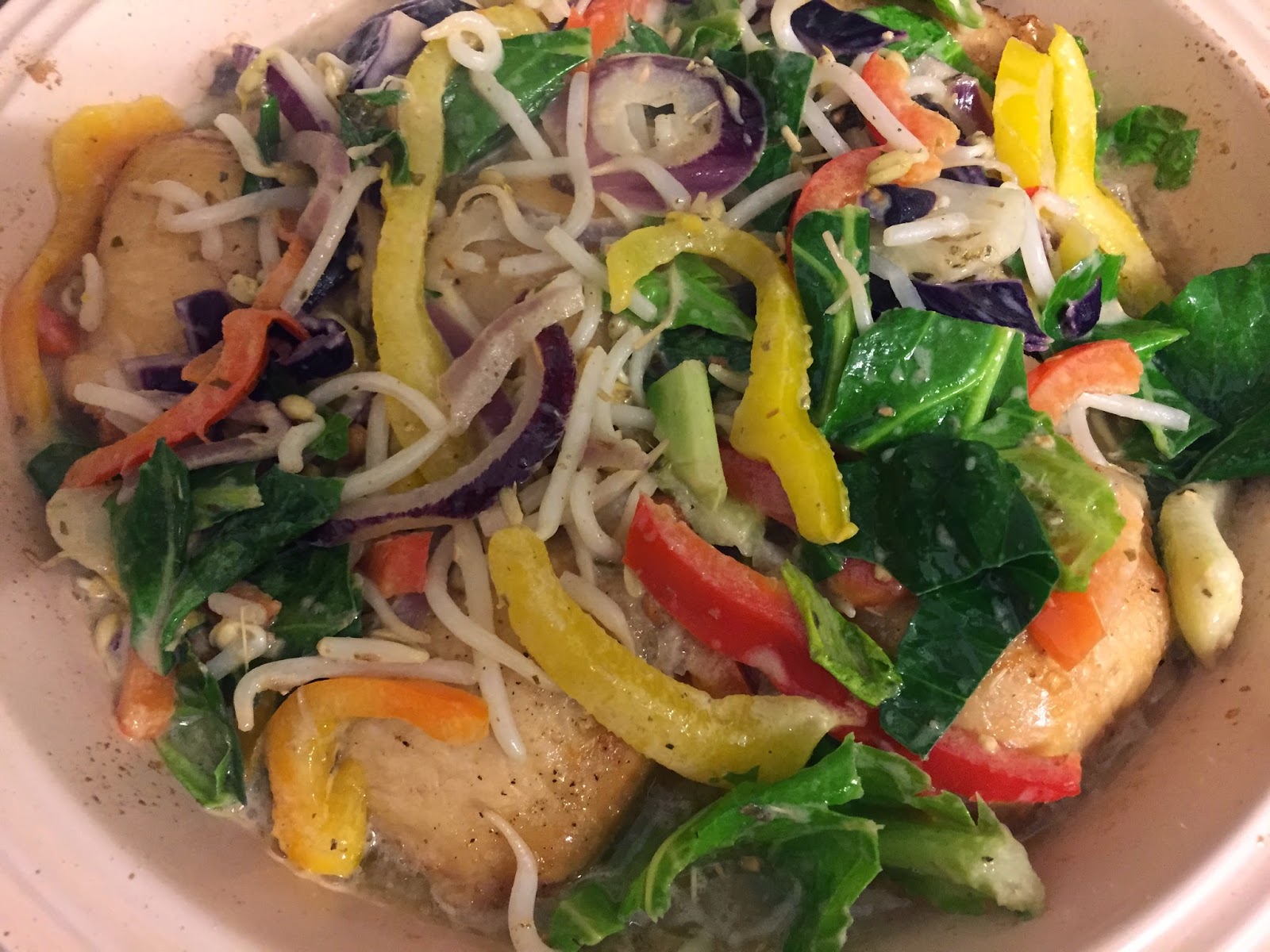 I placed the dish back in the oven for a further 25 minutes. When I took it out, the gorgeous smell and hot steam hit me immediately. I felt like I had created a masterpiece. Although, the proof is in the eating. Sitting down to eat it with; rice and quinoa, a dollop of creme fraiche and a complimentary juice I had made (using lime, mint, apple, cucumber and celery), it sent my taste buds into overdrive. It pays off to be a little adventurous… 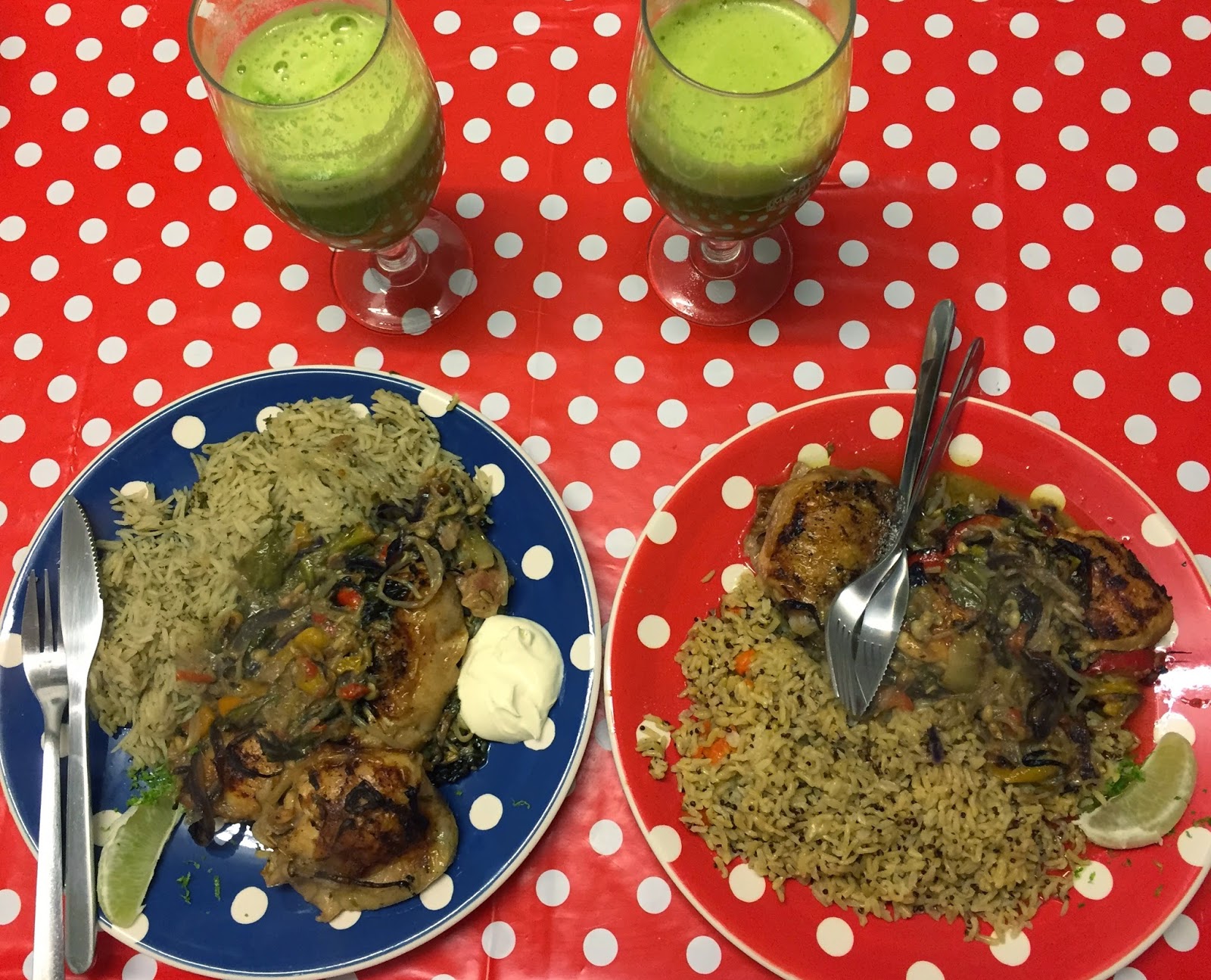 Posted by ateacherstaste at 05:54 No comments: